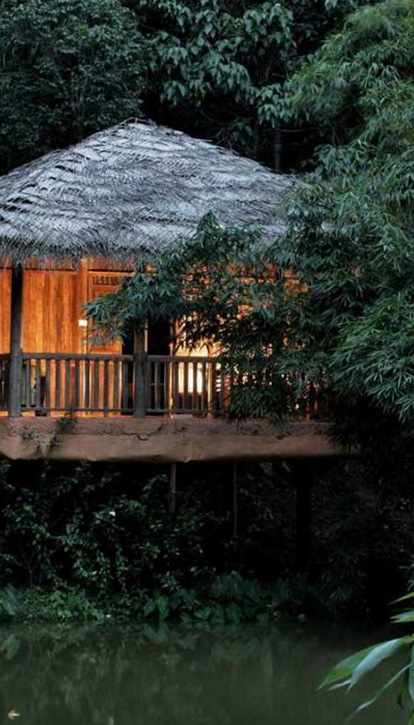 Loose yourself to
nature’s spell

With its enthralling spice gardens, sparkling waterfalls, astounding landscapes, enchanting forests and undulating valleys, Wayanad has all the makings of a sublime holiday destination. The beauty of Wayanad is so enchanting that it simply gets under your skin. Wayanad is one of the few districts in Kerala that has been able to retain its pristine beauty of nature. Hidden away in hills of this land are some of the oldest tribes, who are yet untouched by civilization. The very first historic engravings in Kerala were discovered here. The name Wayanad derives from 'vayalnadu' means Land of paddy fields.

Have the experience of the misty morning in the blissful and dreamy Wayanad. The serenity and old charm seen in this atmosphere is very rare. It is a panorama of hills and valleys sprinkled with rainbow beads of wild flowers and sweetening fruits. The striking variation in the topography is reflected in the skies that shift from an azure blue to burnt yellow again to indigo within hours. The prehistoric engravings which were found first in Kerala speak of a pre-historic culture that existed in these mountains. The Wayanad tribals have been an integral part of this region. The tribes of Adivasis, such as Paniyas, Kurumbas, Adiyas and Kurichyars, were the early settlers. In short, Wayanad is the perfect blend of the cultural and natural beauty experience.

Climate/ Best Time to Visit : The climate is favorable throughout the year. February to December can be chilly with temperature dropping to 11 C while in summer it will hover around 25 C. The rainfall also is good. November to March is considered the best season to visit Wayanad.

Good to know : In 1780, the British came to Wayanad and subjugated the local rajas under their rule. While all of them obeyed the British and paid the tax, there was the valiant raja 'Pazhassi Raja' popularly known as 'The Lion of Kerala'. He came to Wayanad and organized the local tribal warriors into the guerilla army. He bravely fought the British for 9 years till he had to finally kill himself to avoid surrender. The British were so impressed by his gallantry that TS Babur brought Pazhassi Raja's body in his own palanquin.

This is a resplendent place that offers a true taste of Wayanad. Lakes, ravines and gorges; dreamy dawns and misty evenings; verdant hills that shove the clouds are standard fare in Vythiri. There are plenty of God's endowments around Vythiri. The natural attractions scattered around Vythiri include Pookode Lake, Chembra Peak the tallest summit in the district and Waterfalls at Kanthampara. Vythiri has off late developed into a real romantic getaway.

Wayanad Wildlife Sanctuary comprises an area of 344.44 square kilometers which is combined by Muthunga in the south and Tholpetty in the north. Muthunga is a part of the Nilgiri biosphere region that is made up of the Bandipur Tiger Reserve in Karnataka and the Mudumalai Sanctuary in Tamil Nadu. Plantations of teak, silver oak, rosewood and eucalyptus cover nearly a third of the sanctuary. Moist deciduous forest with few patches of semi-evergreens, bamboo groves and also varieties of ground flora, shrubs and creepers are found over here. The sanctuary is also enriched with various types of fauna. Elephants and deers are daily attractions of the sanctuary. Sometimes we can see them amidst of the thick bamboo groves eating or flanking the roads. The big cats, tiger and panther are infrequent visitors. Bonnet macaques and Langurs are the most common types of monkeys found here. According to 2004 census; 4 tigers, 6 leopards, 450 bison, 200 Great Malabar squirrels and 12 bears enhanced the beauty of this sanctuary. Reptiles like monitor lizards and varieties of snakes have also made this their home. Watching towers erected near waterholes are made for the ideal viewing of spots. You can still merge in the peacefulness of forest from your perch amid the tree tops.

Sultan Bathery is named after Tipu Sultan and his armies who dumped their ammunitions here in the old Jain temple. The Sultan left another long enduring legacy of his exploits in these hills. The tactical location in the heart of Wayanad might have drawn Tipu Sultan to this town. But today it beguiles innumerable tourists with spell binding pre-historic caves, luxuriant vegetation, rolling hills, rivers and jungle trails.

The literal meaning of 'Edakkal' is the stone in-between. This rock shelter is a one kilometer trail from the hillside. The trekking takes 30 to 45 minutes. It's not the hill but the scenic panorama which keeps the visitor in awe. The images on the walls of the cave belong to the Neolithic age, dating back to 4000 B.C. There are images of a tribal king, a queen, a child, a wild dog, an elephant and a deer. On another wall, we can find a script written in Tamil Brahmi. The second cave is a bigger one with big pictures. As we lookup, we can see a huge sarsen astonishingly stuck in between two other rocks with its angular bottom projecting below. It's truly incredible!

The folklores of Wayanad readily claim Meenmutty waterfalls to be the largest and the most dazzling waterfall in the whole of Wayanad. On reaching the point, we can gaze at the sheets of water falling nearly 300 meters down a cliff in three distinct stages. The long woods, greenish hillsides peppered with plantations are additional attractions. Here, we need to prepare for a hike up to 2 km through the forest.

The museum is considered as one of the best heritage museums in Kerala. It has a lot of 13th century collections stone carvings, idols made of hard and soft rocks, figurines from possible crypts and terracotta relics. We can observe engravings done on the stone walls in a special script known as 'Vattezhuthu' and soft stone idols of tribal gods, called Herostones, are some of the exclusive things in the museum. We can also watch short films and clips on the subject are displayed in an attached mini-auditorium. There is a tribal dwelling recreated on the adjoining ground which puts the spot light on their life.

Jains migrated in large numbers from Mysore to Wayanad between the 12th and 16th centuries. Now, none of them are seen in this region. The early settlers of this area however left behind a legacy in stone, by way of many temples. The one at Puthangadi close to the Panamaram and another at Sultan Bathery showcase some exquisite carvings and artistic murals. Bathery temple is believed to have been built during the 13th century and its design is strongly influenced by the architectural style of the then reigning Vijaynagara dynasty. This temple served as a shrine for worship, next as a centre of commercial trade and finally as the ammunition store or battery of Tipu Sultan's army from where the town got its name. This structure is fully made out of granite and the inner sanctorum holds a large square granite slab with carvings of Mahavira.

Rainforest trekking with professional jungle guides to familiarize you with the flora and fauna of the region is a much sought after experience. See the elephant at close quarters, taste fresh honey, see coffee cultivation and so on. The other popular trekking routes are Meenmutty to Nilambur and Chembra Peak.

Enroll for a spice plantation tour and observe through spice gardens from cardamom, cinnamon, pepper and ginger to vanilla cultivation. Kalpetta is essentially the trading town of this district

River trails through river Kabini on bamboo rafts to visit untouched parts of the district. The rafting trips help in local interaction and getting the feel of the culture of the land besides being an exhilarating experience in itself.

From prehistoric cave paintings in Edakkal to the legendary Lakkidi's chain tree to sacred temples and Pazhassi Raja, Wayanad is home to many tales, folklore and legends worth knowing.

Camping in the middle of the thick forest along with a trained wildlife volunteer could prove to be an adventurous experience.

Varieties of spices are on offer like pepper, nutmeg and cinnamon of high quality. The Uravu Eco shop offers a variety of bamboo products, artifacts and souvenirs which are unique and made by tribal women.

By Air : Wayanad does not have an airport of its own; the most convenient airport is Calicut International Airport which is about 90 km away. Kozhikode (Calicut) has a very good air network and is connected to Delhi, Mumbai, Goa, Chennai, Kochi and Kolkata.

By Road : Wayanad is on NH 212 connecting Mysore and Kozhikode. Buses from Kozhikode via Vythiri to Kalpetta are the best bet on road.

By Rail : The nearest railway station is Kozhikode which is 63 km away.