Hi there 👋 Can I help you with a free customised tour plan?

On your mobile, tablet or computer - no question is too small!

Request a Call back

Send us a mail

Why try IndusR As a 100% Local specialist for South India with long-standing relationships with local suppliers, we offer

Request a call back

One of our destination experts will call you straight back when it's convenient for you.

Send us a Mail

Tell us about the trip you're planning, and we'll email you straight back with some tailored stay options. Have a specific question? We can help with that too. 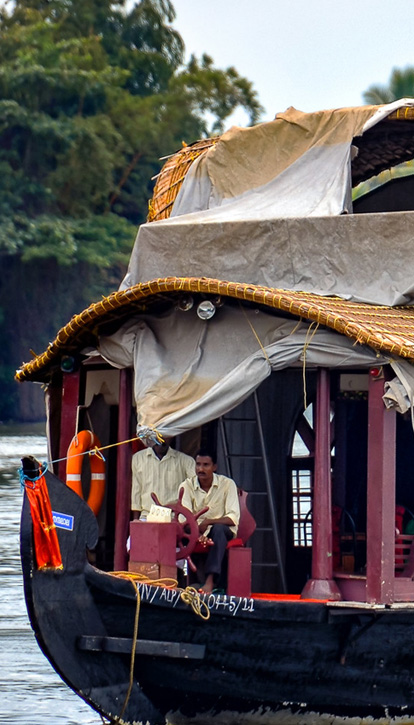 The Venice of the East

Alappuzha (Alleppey) with its placid backwaters is popularly known as "the Venice of the East". This natural beauty of Alappuzha is a treat to our five senses with the criss-crossing canals, fertile paddy fields, lagoons and the majestic coconut farms spread all over the area. The architectural heritage, long stretches of beach and winding canals along the Vembanad together give this palace an alluring quality. The world famous Nehru Trophy boat race conducted at the Alappuzha Punnamada Lake every year is an added attraction of this destination

Alappuzha had its heyday as a commercial hub when Dewan Raja Keshavdas in 1775-76, built it to be a major port of the erstwhile Travancore state. With the establishment of the first coir factory, Alappuzha soon became the power centre of the coir trade. Apart from that Alappuzha became the home of the trade union movement. All those early settlers and Britishers as well have left their legacy in the form of numerous old mansions and trading houses designed in a distinctive architectural style. Preferably located as a base for backwater cruising, Alappuzha attracts visitors all year round for that singular experience. The specialty of Alappuzha is that we can see this fairyland by travelling through boat. Even today local people choose the water transportation to travel from one place to another though there are buses and trains. The distinctive culture and natural beauty make this charming land magical.

Kuttanad is said to be the 'Rice bowl of Kerala' which is like a gem in the crown of Alappuzha. The most important occupation here is farming. Rice is the main agricultural product. The scenic countryside here displays a rich crop of bananas, yams and cassava. This is one of the rare places in the world where farming is done below sea level. Most of the area is drenched throughout the year. Three rivers, namely Pampa, Manimala and Achankovil, intersect the length and breadth of Kuttanad.

A leisurely houseboat ride from Alappuzha on the Vembanad Lake is the best way to discover this stretch of backwaters. You get a real feel of the rural Kuttanad culture as the boat travels slowly through the narrow canals which are the lifelines of the locals here. The first stop on your trip around the lake is R Block. This is a piece of tilted land of about 3000 acres where cultivation is done uniquely at a level below sea level. As you leave the R-Block a tiny speck of land called the Pathiramanal (Midnight Sand) looms at the distance in the endless expanse of the lake. The island is said to have a long story associated with it. A lot of action occurs at the Pathiramanal in the evenings. The sunset view from Pathiramanal is amazing. Vembanad offers a cruise of a lifetime!

Alappuzha beach is a rather sedate and plebian unlike many other counterparts in Kerala. The beach is well kept and the promenade is packed during the evenings by people who wish to catch a glimpse of the heavenly sunset here. There is also a statue of a fisher woman cradling a baby her arms.

Maharaja of Travancore, Marthanda Varma, set this up as a small model of Padmanabhapuram Palace in Thiruvananthapuram. It is now an archaeological museum that stores the mural paintings and other antiques which include a Sanskrit Bible, pooja ceremony utensils and oil lamps and many more. There is a three metre high mural that depicts Gajendra Moksha, the Puranic story of the Hind mythology when Lord Vishnu rescued the elephant Gajendra from the clutches of a crocodile.

Activities & Things to do

Travelling on the specially designed houseboat along the calm waters of the Vembanad Lake is one of the most unique experiences on offer at Alappuzha. The food on the houseboats to put it mildly is exquisite!

Backwaters host many special events during August to September. The electrifying races by carved wooden boats set the backwaters on fire. Boat races are held in connection with Onam, the harvest festival in August/September. Scores of long snake boats and other smaller crafts participate in these events. The largest team sport in the world, the snake boat races are preceded by colourful water parades

A leisurely walk or cycling through the myriad hamlets is the best way to experience rural Alapuzha in all its beauty. The vistas of paddy fields and small cottage industries making coir out of coconut fibre are things you are likely to encounter. You could also spend time at the local toddy shop experiencing the local alcoholic beverage and taste the exquisite cuisine in these small shops.

By Air: Alappuzha does not have an airport of its own; the most convenient airport is Kochi is nearly 2 hours drive from here. Kochi has a very good air network and is connected to Delhi, Mumbai, Goa, Chennai, and Kolkata.

By Rail: Alappuzha has a railway station of its own. Regular trains ply between Trivandrum and Alappuzha. Trivandrum again has train connection to the major places throughout the country