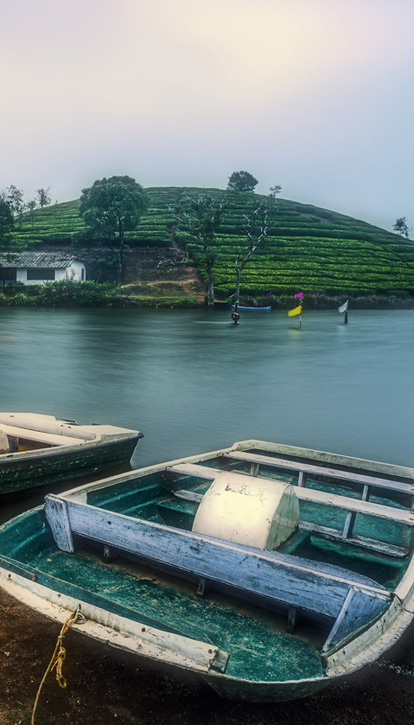 Vagamon, a silent retreat in the Western Ghats is in the Idukki district. Famed for its dales and grasslands that house orchids, herbs, floristic varieties, some very rare mammals, insects, birds and butterflies, Vagamon is a mount of heritage. The most striking is its freshness which is everlasting!

Another more welcoming intruder is interrupted by the mountains: swollen clouds bulged with rain. Kerala receives the benefaction of plentiful rain, and parts of the mountains are very wet indeed. The result is an epidemic of greenery: lush rain forests, verdant meadows, eucalyptus groves, clusters of silver oaks, and expanses of tall grasslands pushing for space on Vagamon hills. Vagamon really became known in 1926 when Walter Duncan and Company set up their tea plantations within a 534 acre drape of land.

Located at 1,100 metres above the sea level, on the western peripheral of Idukki, bordering Kottayam, the Vagamon mountain range, once a wild area, was cleared by the early planters for the cultivation of tea and coffee. Vagamon is also home to a variety of wild Orchids. The northern part of Vagamon is high Rocky Mountains whereas the southern part is fabulous Rolling Meadows and scenic vistas of Kottayam, which provides delight to our eyes.

Location: It borders the Kottayam district and is 60 km from Thekkady, Idukki district, East Kerala.

Climate/ Best Time to Visit : The climate is generally cool in the range of 13 C to 24 C during the summers dropping to 9 C during the winter season. August to May is the peak season but you can also enjoy the rains during June- July.

Good to know : Vagamon is a symbol of India's secular identity. On the 3 hillocks which overlook Vagamon town, stand three major worship places of worship – Murugan Mala, Kurisumala Ashram and the Thangal Para.

There is a marvellous pine forest valley in Kolohalamedu where you can take in the pine-scented air and take a glimpse on the towering, stately pine trees densely attired with gleaming needle covered branches. This patch of area is a restricted area where you can see caution boards warning the tourists not to carry any plastic or litter the place.

Vagamon is recognized for its rocky terrain and hummock. Like most of the hill stations, Vagamon also has a "suicide point", a V-shaped gulch called the Moopan Para. The depth is truly blood-curdling. We can see the deepness only when the fog is clear. Thangal Para, a precariously huge rock located five kilometres from Vagamon is worth catching a sight. Adjacent to the rock is the mausoleum of Sheikh Fariduddin, who is believed to be a Sufi saint of Afghan, lived here 800 years ago On the eastern side of Kurisumala is Murugan Para, a rock-temple dedicated to God Murugan that magnetizes devotees throughout the year.

This place in local parlance is called Motta Kunnu meaning bald hills. It is a perfect stretch of natural garden making it an idyllic place for a long walk or trek. Enroute you could get a glimpse of wild life and bath in water bodies in between these rolling hills. This is a very popular picnic spot and also very popular as a shooting location for south Indian films.

Teekoy is a small village located on the hills of Vagamon along the banks of the Meenachil River. Teekoy also has a waterfall of its own-the Marmala waterfalls which gurgle and cascade down rocks and slopes. A drive upto this little village is bound to be an enchanting experience, with magnificent views all around. Parts of the village are covered by rubber plantations which is also the main occupation of the inmates. Teekoy is also famous for its trekking routes. Ayyampara is one of the favorite spots of tourists in Teekoy where there is always a pleasant breeze in the evenings. The view from the top of the Illickan mountains nearby is breath-taking, to say the least. On a night with a clear sky, you can even see upto the Alleppey port, 75 km away!

The Kurisumala Ashram located right at the heart of the Sahyadri Mountains combines Christian beliefs with Indian spiritual thought. The monastery, founded by a Belgian Cistercian Francis Acharya, is most known for its serene and calm atmosphere. The monks here lead an austere life of chastity and silence, spending their time in manual labour and meditation. Production of milk and honey is their means of livelihood. The honey is collected from the rock clusters among which beehives are to be found in plenty. The cows bred by the monks yield around 1500 litres of milk a day. The 'Resurrection Garden' the highest point of the hills, is used by the monks for meditation. All are welcome to come and spend a few days in the Ashram, provided they adhere to the rules.

Vagamon is a fast upcoming destination in the tourism scenario of Kerala. It has awesome climate but is not cluttered by the overflow of tourists. The natural beauty of the place has not been affected by human intervention. So trekking along the wilderness is a beautiful experience in Vagamon. You can get a glimpse of wildlife and have some interaction with the localsenroute.

The international paragliding festival conducted annually by the Adventure Sports and Sustainable Tourism Academy (ASSTA) is a gala event. It completely invigorates this town. The festival during March or April is a superb time to visit Vagamon.

By Air : The nearest airport is Kochi International Airport about 120km from here. Kochi has very good air network and is connected to Delhi, Mumbai, Goa, Chennai and Kolkata.

By Road : Vagamon is accessible by NH 49 along Thripunithura belt then through Ettumanoor to Eratupetta. The route has reasonably good connectivity.

By Rail : The nearest railhead to Vagamon is Kottayam which is about 64 km away. Kottayam is well connected to many other major cities in India