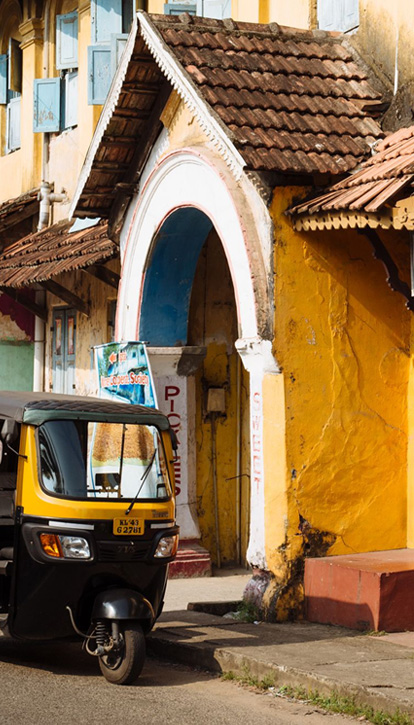 Kochi with its continuous buzz of activity that is her ambience, warm welcome to ships across the oceans, grandeur and antiquity of her architecture, powerful aroma of spices through the streets and joyous hospitality of her people is truly the "Queen of the Arabian Sea." Kochi in its true self reflects the cosmopolitan society of Kerala best with its perfect blend of modernity and tradition. Kochi is traditionally the most popular way to start exploring Kerala- one of the 10 paradises in the world as described by National Geographic Traveler.

Kochi being one of the finest natural harbours in the world has a very eventful history. Trade relations and cultural interactions with Arabs, Chinese, Dutch, British and Portuguese have all left a mark on this legendary city which is most evident in the vivid architectural capital of the city. Exotic spices, ivory, sandalwood, perfumes and gold are some of the things that attracted foreigners to this market town. Today, Kochi is transformed itself to the commercial capital of Kerala. It is an IT hub and attracts the largest number of cruise liners in India.

Because of its complex history the ethnic blend of Kochi is unique with Jews, Syrian and Catholic Christians, Malabar Muslims and Traditional Hindus all living in harmony. In short, this enchanting city offers everything from heritage to natural beauty to glimpses of Modern India all in one package

Location: On the western coast near the center of Kerala, 218 km north of Thiruvananthapuram, Ernakulam District, Central Kerala

Climate/ Best Time to Visit : Kochi has very humid weather all through the year. With the monsoon setting in the soaring temperatures dip slightly but it remains humid. September to February is the best time to spend here.

Good to know : Kodungallor was a much established harbour in days of yore. The destiny of Kochi was changed in 1341 with the flooding of the Periyar River which destroyed Kodungallor port and created a natural harbour in Kochi. The trade history of Kochi starts from there.

This imposing structure with a gothic façade was built by the Portuguese in 1506. It was deemed a cathedral by Pope Paul IV in 1558.The collection of different artefacts showcases the influence of the various eras and one really does get a sense of the age of the building from the bedraggled woodwork and doors. The magnificent painting of the Last Supper on the top of the main altar and large canvas paintings of the passion of Christ on the ceiling merit special mention. For the artistic grandeur is place is a must visit

It was built in 1503, by a group of Portuguese Franciscan friars who came to Kochi along with Pedro Alvarez Cabral.This is India's first European church. Most of the building remains the same despite being under the possession of different cultures. However the original timber structure was replaced by stone walls and tiled roof in the 6th century. For history enthusiasts, the church has tastefully engraved tombstones of the Portuguese and Dutch and also a register of marriages and baptism done in the church since 1751. Another interesting feature is that the fans or pankahs are still operated by ropes. Vasco Da Gama the celebrated Portuguese explorer's mortal remains were buried here in 1524. His tombstone remains intact, although his remains were taken back to Lisbon 14 years later.

Overlooking the Arabian Sea in the backdrop of the legendary Chinese fishing nets, this place is ideal to spend a lazy evening viewing the romantic sunset. The granite walkway between the beach and Vasco da Gama Square where numerous stalls sell fresh seafood throughout the day is a popular destination. Visitors also have the option of getting their fresh catch cooked according to their individual tastes at the nearby shacks by waterfront along the esplanade. This beach also becomes a major attraction on New Year's Day, with a colourful carnival.

These are the first things that come to your mind on the mention of Kochi and can be spotted along the beachfront of the Vasco da Gama Square. They are gigantic cantilevered Chinese fishing nets, which needs at least 4 men to operate them, are set up on bamboo poles supported by teak wood structures. It is said that these were brought down from China during the 13th century from the courts of emperor Kubla Khan. These are still in use and are especially useful during high tide.

Fort Kochi also has a Dutch cemetery, Parade Ground, various clubs established in the early 1900's and still in existence, Indo-Portuguese museum, a maritime museum and heritage locations like Loafer's Corner to offer. These can be covered on a relaxed trip by cycle or walk around Fort Kochi to get a flavor of its unique history.

This pardesi synagogue has a checkered history. After it was constructed in 1568 by wealthy Jewish merchants, in 1662 it was destroyed by canon fire during a Portuguese raid and was rebuilt two years later when the Dutch came here. The Synagogue’s interiors are mesmerizing with interesting features ranging from 19th century glass oil – burning chandeliers from Belgium and Italy to a gallery for women suspended by slender gilt columns. Hand painted blue willow patterned floor tiles that were obtained from Canton in China is also a special attraction. The Hebrew inscriptions and painting depicting the times of yore add to the aesthetic value of the place.

This building built in the traditional kerala Naalukettu style has a temple within it. The grand construction has so much to offer with its arches, spacious halls, stylish ceilings and an large collection of mural paintings of traditional Hindu temple art that decorate the walls. The epic story of the Ramayana is depicted in 45 murals made during the 17th century. There also many other murals of Hindu gods. This was built by the Portuguese in repentance for plundering a Hindu temple nearby.

The antique shops in Jew Street are a special attraction for shoppers. When Jews migrated to Israel, their old dwellings were destroyed and new facilities were made. Anything that could be saved in terms of artefacts, woodwork, furniture, vessels and bras work, of both utility and aesthetic value have been collected and are on display at the various antique shops proliferating in the alleys of Jew Town.

It was spices that brought travelers from across the globe to Kochi. To this day, the smell of ginger, cardamom cloves and pepper thanks to the spice market that still survives fills the air. Spices are also available in the Broadway in the main city.

Located on one end of Vypeen Island, around 26 from Ernakulam, Cherai beach is perfect for a beach experience sans crowds and vendors. The added attraction is that it has golden sands of the beach on one side and palm fringed backwaters on the other. This place is connected by boat from Fort Kochi and now also by road with the improved road system.

With a spectacular view of the backwaters and the harbour right in the prime of the city this place is a landmark hangout for the city inhabitants. Shopping options along the walkway are immense ranging from exotic tea to electronic goods. The place also gives a feel of corporate India with its luxury hotels, restaurants, corporate houses and cinema halls. This is an ideal place for a romantic evening walk in the city.

Athirapally waterfalls, famous for its film shoots and as a tourist destination offers a magnificent sight as the Chalakudy River takes an 80 feet plunge. Amidst the green foliage at the entrance of the Sholayar forests, the river tumbles down onto dark granite below making for a brilliant sight. Located hardly 80km from Kochi city, you can enjoy the falls from the top of the rocks or take a trek down the forested hill to the foot of the falls. Also look out for the awe inspiring Vazhachal falls on the way to Athirapally.

Kerala has gracious history starting from the Neolithic age to the modern period. Located in Edapally just 10km from the main city this museum is aimed at showcasing Kerala to visitors in a comprehensive and most importantly intriguing manner. Apart from a guided tableau, the museum houses Paintings, sculptures and artifacts across the phases of traditional and modern art. The statue of Parasurama outside the main building is also an attraction.

Kathakali the traditional drama-dance form of Kerala is worth experiencing. The Kochi heritage zones like Fort Kochi and Mattancherry offer various centers where this traditional art form can be experienced.

Going on a boat trip around the Fort Kochi, Mattancherry belt is a very nice experience. Boats can also be availed as a travel option to beaches like Cherai. Boating gives the whole Kochi experience a different dimension.

Shopping in Kochi for spices, artefacts, Kerala special souvenirs and so on could be good as the range offered by the kiosks is considered the best.

Beaches and water bodies in Kochi offer thrilling opportunities to the adventurous mind in form of motor boating, canoeing and water biking

By Air: Kochi international Airport which is 34 km away from the main city is well connected to all major cities of India. It handles both international and domestic flights

By Road: Kochi being the economic capital of Kerala is well linked by roads to all major parts of the country. A pair of bridges link Wellingdon Island to the mainland. NH 47 and NH 17 are the national highways that pass through the city

By Rail: Ernakulam Town (North) and Ernakulam Junction (South) , both serve as railheads for this town and are well connected to cities in Kerala and India.